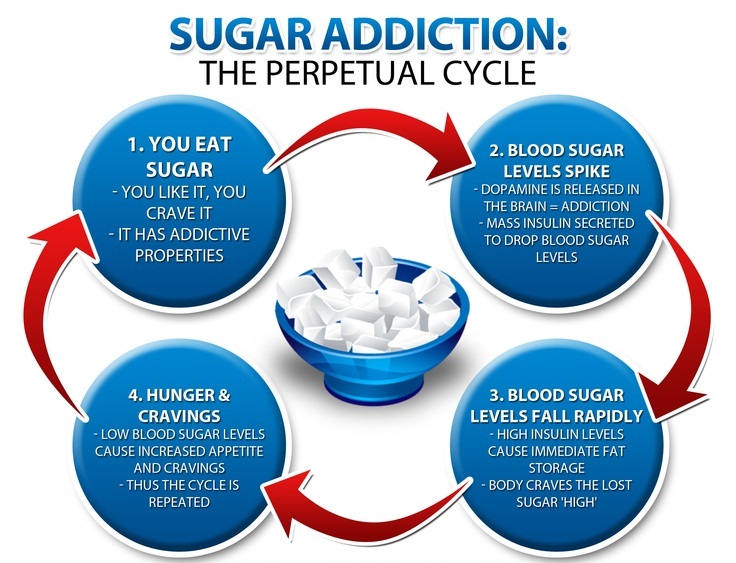 Researchers at Princeton studying the neurochemical effects of sugar, have shown that sugar acts as a gateway drug for other drugs in many individuals. In one study, the research group fed chow to the rats as well as a 25% sugar solution similar to the sugar concentration of soft drinks. After one month the rats became “dependent” on the sugar solution, ate less chow and increased their intake of the sugary drink to 200%. Similar but stronger effects have been reported for rats given aspartame. The chemical reaction of sugar and aspartame stimulates the brain by activating beta endorphin receptor sites, the same chemicals activated in the brain by the ingestion of heroin and morphine.

Another study noted that sugar affects opioids and dopamine in the brain, and thus has addictive potential. It referenced” bingeing, withdrawal, craving and cross-sensitization”, and demonstrated behaviorally that sugar bingeing reinforces the addiction. These behaviors are related to neurochemical changes in the brain that also occur during addiction to drugs. Neural adaptations included changes in dopamine and opioid receptor binding, enkephalin mRNA expression and dopamine and acetylcholine release in the nucleus accumbens. In other words, it is a real chemical addiction in the brain just like any other narcotic.

Even more disturbing is the research that shows the vast majority of hard drug addicts started their addictive behavior first with sugar addictions. Treats from their mommy with other environmental factors leave teens and adults susceptible to drug addictions. Many times the individual has strong moral reasons to avoid street drugs, but becomes addicted when mindless doctors hand out drugs like candy.